A trip to Pittsburgh included a trip to brewery,restaurant as we had never been there. The church setting was very,very nice.Stained glass windows are beautiful.Beer was also good.Belltower Brown ale is being made again----loved it.Wasn't impressed with the food---just OK.We are glad we visited as it is worth a visit at least once.Next visit to Pittsburgh----back to Fat Head's!!!

I saw on the news today that some Burger Kings are planning to sell beer with their burgers. Have I died and gone to heaven?
Oh wait, we live in Pennsylvania. Ain't gonna happen here.

I really had a great time @ U Pick 6 last night. As far as the beer goes it wasn't too bad, but I think it lacked much flavor. However, it would be a nice refreshing beer for a hot summer day!

Had a Long Trail Ale in Vermont last winter. Maybe several. Anyway, tried one of their variety packs this summer and BW was one of them. can't say it was a fav, I seem to prefer wheat beers with orange. But liked every other offering including the IPA. I hope this Erie Beer Society works out. I have long advocated a 'beer club' in the area!

I attended my first meeting of the Erie Beer Society last night at my favorite watering hole, the U Pick 6 Beer Store. The Society is a great way to bring true beer lovers together in a reputable manner. Thanks to all who made it happen. And thanks to Long Trail for your offering.
Long Trail has accomplished what they set out to do, make a light and refreshing wheat beer with a hint of blackberry flavor. This was a very good example of a summer thirst quencher. The light golden color, low… Continue

My wife & I attended our first meeting @ U Pick 6.We enjoyed meeting new people & the event seemed well attended.The beer was too "thin" for our tastes. Not much flavor,watery.This would be a good summer beer/entry level craft beer for a new beer drinker.We look forward to the next meeting----cheers!

I agree that it would make a great summer drink. It was very drinkable but I feel it needs just a little more flavor. Not that I want an after taste but just needs a little more of a kick.

I agree that it would make a great summer drink. It was very drinkable but I feel it needs just a little more flavor. Not that I want an after taste but just needs a little more of a kick. Continue

Congratulations Lisa - the January meeting was a blast. I must admit that I am not a wheat-beer guy. There is an after taste that I am unable to describe. It may be a yeasty finish kind of thing – not sure, but I did enjoy the Long Trail Blackberry Wheat. The color and flavor were very much like a Rolling Rock. I only recognized the slight hint of blackberry and I didn’t get any of the wheaty after taste. Good starter beer for anyone who wants to experiment with craft brews.

Good morning all! Thanks to everyone who came out to last night's meeting at U Pick 6. I am wondering if you enjoyed the beer we sampled -- Long Trail Blackbeary Wheat. Let us know by blogging about it on this site. I am fond of wheat beers so I was looking forward to trying it. Very drinkable! I especially liked that the fruit taste was not overpowering, though it smelled very fruity. It was a little light on the wheat taste, but overall a delicious and easy-to-drink beer that has hot summer… Continue

Hello all! We're giving away official Erie Beer Society t-shirts to a few lucky beer-lovers at tonight's meeting. Men's and women's versions will be available for sale in the near future, but tonight's meeting is the place to get one FIRST. And, even better, for FREE. Only the folks who are present tonight are eligible to win one. It's not too late to RSVP! 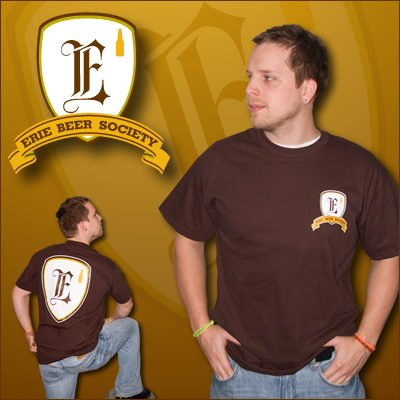 My wife and I went to the Church Brew Works in Pittsburgh on Saturday. Church is located in the old St. John's The Baptist Church in Lawrenceville, across the street from the ‘now closed’ Pittsburgh Brewery. I had two beers there –the Pipe Organ Pale Ale and a seasonal called Sleigh Wrecker.

I love a strong hop flavor in a craft brew and usually ask for the hoppiest thing on tap. If the wait staff knows their stuff, they usually will serve a tasty mug of just what the doctor ordered.… Continue

The only Blackberry allowed at our meeting!

Hello all! It's time!

We are sampling Long Trail Blackberry Wheat at this month's meeting on January 21 at U Pick 6. This meeting will also be the first time you could win the fashion-forward (...or backward) official Erie Beer Society t-shirt. Please remember to RSVP. Just click on the event in the calendar and you'll know what to do.

So, tell the spouse that you are headed to the meeting and will have your Blackberry with you!

Here the scoop on Long… Continue